While most of us has been eyeing this Westy for a while, since the auction is ending today I thought it was definitely worth a post, at least to log the VIN and the record of it being for sale.  This epic looking beast is a 1989 VW Vanagon Syncro 1.6L TDI High Top Westfalia Camper in red with all the fixins and then some, including the coveted Club Joker trim.  This rig is described as “expedition ready”, and sure looks it.  eBay Link

While the 1.6L TDI doesn’t boast much horsepower and tourque, you will get some darn good MPGs out of the deal. I’m guessing at least 25 HWY, even with a high top.  The syncro all wheel drive features both front and rear differential lockers, but not mention of a decoupler (disengages from the front wheel drive), which would be nice to have especially considering it only has a 1.6L engine.

Among the list of awesome features and upgrades include a programmable propane heater, an 8,000BTU Haier A/C unit (does take up some storage space), new springs & shocks, front & rear skid plates and is said to have been rust proofed and undercoated since day one.  Keep in mind these factory high tops are insulated, so the propane heater and A/C will be well worth it on cold nights and hot days. The seller doesn’t state how well or if all the kitchen appliances work, but I’m guessing they wouldn’t let that slip by on a beautiful specimen like this. 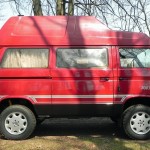 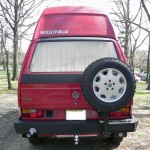 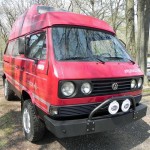 This van is being sold by the importer who has recently been grabbing up a variety of syncros and other VWs from Europe, their Facebook page can be viewed here. While it was given a US VIN upon import, I don’t think much can be done with it in terms of looking up a title history.  VIN ( WV2ZZZ25ZKG093825 ) The odometer reads 38,766 miles, however since it came from Europe, I’m not sure how this happened, considering every Vanagon overseas should have a KPH and Kilometers in the cluster.  Also, a note on the engine for CA residents, I’m not 100% sure this diesel is legit for CA smog, since it was never officially sold in the CA or US market in another vehicle. Maybe take the VIN to the DMV and check with them before trying to register it in your state.

With eight hours left on the auction it has already cleared the $40k mark, and it appears to have no reserve price.  Keep in mind especially with auto sales, the seller has a right to cancel or refuse transaction for any reason, so they could be expecting much more than whatever the high bid ends up being.  With the limited availability of reasonably priced well kept syncros in the US, this will easily clear the $45k mark today, if not $50k.  What do you think it’s worth?  What do you think the highest bid will be?  Let us know in the comments below, or head on over to the individual posts about this TDI Syncro Westy on Facebook, Twitter, Pinterest or Google+ and share you wisdom there. eBay Link