This van is a 1990 VW Vanagon Westfalia Multivan with unknown mileage, automatic transmission and a stock recently rebuilt 2.1L engine.  It appears to have it’s original Orly Blue paint job, which is one of the more sought after varietals of the later model years.  While the seller did include the VIN ( WV2TB0254LH057700 ), aside from the pictures minimal unique details about this van were provided.  I’d suggest doing a CarFax report if you’re serious about buying it. As far as the pictures, it appears to be fairly stock with the exception of the 15″ or 16″ wheels, the paint still shows well even in the shade, though the pop top coat looks a bit sun weathered.  There’s a punch crack in the front bumper, but other than that the body looks sound.  No pictures of the pop top, the the seller mentions it has a tear in it.  Even if it has 300k miles on the body, the price is still attractive at only $16k for a late model Westy in Southern California. The Samba Link 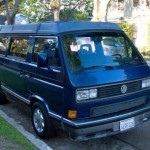 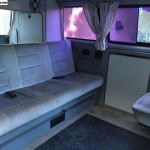 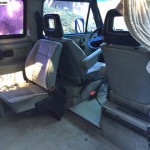 In 1990 and 1991, the “Weekender” was replaced with the “Multivan”, though they’re still very similar.  It’s always a trade off between the kitchen / no kitchen.  The main benefits of no kitchen are; more space, less rust, lower and more evenly distributed vehicle weight.

What do you think it’s worth? Are you going to check it out soon?  Let us know in the comments below, or head on over to the individual post about this Westy on Facebook, Twitter, Pinterest or Google+ and share your wisdom there!