This 1990 VW Vanagon Westfalia Camper is up for auction in sunny Ft Lauderdale, Florida. The seller states “if you don’t mine some rust”, so be careful with these. The seller offers free shipping up to 1,000 miles, but fails to disclose detailed picture of the drivers side of the van. With the minimal pictures provided, it appears the main kitchen seam is filled in (painted over) and there’s a patch around the RV hookups. While at first glance this might seem like a decent fantasy to fly to Florida and drive a van home, buyer beware. 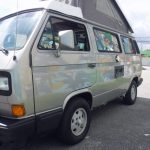 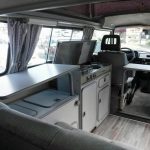 If someone goes to sees the locally, it would be interesting to know what the underside of this van looks like, along with the seams on the drivers side. Otherwise, it the van appears mostly stock, and does come with a nice Catalina awning. No mention of whether or not the appliances work, so be sure to ask if you’re interested. Power windows are nice, but if this van has been salted on the north east roads, you may be in for some electrical surprises. Notably missing are the lower rocker panels that would have originally come on the 1990 models.

By google searching the VIN ( WV2ZB0259LH001343 ), it appears the dealer purchased a VIN Check on CarFax and it’s publicly available. It appears this van sold at auction back in June of 2020, with a 168k miles on the odometer. The van was purchased new in New York in 1990, and the earliest record of it being in Florida is 13 years later in 2003. This adds to the likelihood of more rust in the hookups and seam area mentioned earlier.

The eBay auction ends Saturday, October 31st, 2020 at 7:20pm EST. Let us know what you think in the comments below, or head on over to the discussion about this van on Facebook.

Added to wishlistRemoved from wishlist 7