This no reserve auction in the East SF Bay will sure receive some attention over the next 24hrs. Ending at 5pm PST tomorrow January 30th a 1987 VW Vanagon Westfalia Camper with 200k miles on the body, 26k on a rebuilt engine, and stock manual transmission.  Overall, this van looks to be a pretty good deal, I estimate it will probably sell a teeny bit over $15k.  The seller also provided a Test Drive Video and a Walk Around Video that cover some good good detail, and have already passed 50 views each. With Burning Van last weekend at Ocean Beach, there’s probably a higher than average number of new Westy hunters on the prowl in the Bay Area. There’s quite a few receipts and records available for this 3 owner rig, dating back to 2003, as well as the original window sticker. Below are my thoughts in no particular order. 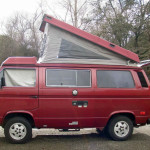 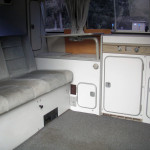 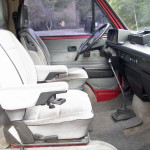