Here’s a head turner up for grabs in the garden state.  This 1987 VW Vanagon Westfalia Camper has a reportedly low 23k original miles on the body and drive train, which is one of the lowest readings I’ve seen in a while.  Aside from a rip in the tent canvas, this rig shows to be in exceptionally good condition.  This van of course features what is likely the original 2.1L engine and 4 speed manual transmission.  It appears to be mostly stock with the exception of the stereo, dual batteries + inverter set up and fog lights. 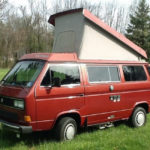 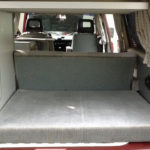 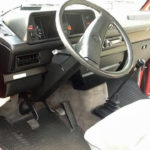 The seller only has 15 feedback ratings, just one from this year, but yet they’ve already used up their Free eBay Auto Check Reports, this isn’t a red flag, but it does lend to some questions.  Next, you’re trying to sell a highly sought after low mileage vehicle like this, with reportedly only 23k original miles, but you don’t provide a title report, just 77 words of description?  The did provide the VIN WV2ZB0256HH070028 , so you could buy a title check yourself from a service like CarFax.  If it’s too good to be true, well…. But maybe?  IMO, the one minor detail that helps verify mileage is the area around the engine lid shown the engine photo.  It’s barely visible, but if it hasn’t been painted over, this says to be the engine lid has rarely been removed.

There appears to be a new propane tank, which I’m quite curious about.  While there’s 0 pictures of the undercarriage, I wonder how much rust there is? In order for a van in the North East to age as well as this one, it has to be garaged. If if it was garaged, why did they opt for a new LPG tank?  I realize the filler valve standards are different these days, but to replace the whole tank?  They usual reason for replacing these is rust.

It appears to have a quality window tint job, but the front side windows are tinted, so be sure to check with your local DMV to see which levels are legal. This is not in California.

Aside from trying to verify mileage with a title report.  My other questions for the seller would be; “how well do the kitchen appliances work?” , “do you have all the service records?” , “why are you selling?” , “what does the undercarriage look like?”

If everything is legit and a title report checks out, I’m thinking the high bid will be in the $25k range, but the deal will likely close outside of eBay.  The auction ends on Friday, April 29th at 9:42am PST.   What do you think it’s worth? Anyone know the seller? Are you going to check it out?  Let us know in the comments below, or head on over to the individual discussions about this Westy on Facebook, Instagram, Twitter or Pinterest and share your thoughts there.