Well I’ve been out of the office since Thursday and didn’t have my computer with me, but never fear, I’m back!  Happy Monday!  Today’s find if you haven’t seen it already is this 1987 VW Vanagon 1.6L Turbo Diesel Syncro Westfalia up for auction in New Jersey with only 44k documented miles. What?  The seller claims is was imported from Europe at a cost of over $88k, wow…  In 1987 the 1.6L Turbo Diesel was a stock option overseas, however these are pretty dang slow, though get great mileage.  It’s a two knob syncro with front and rear lockers, but I don’t think it has a decoupler.  It’s also got some sweet aftermarket upgrades including; Front Skid Plate, Engine Skid Plate, Lift Kit, Upgraded Shocks, Front and Rear Push Bumpers, Rear Tire Carrier and the sought after South African Grille & Lights. It also appears to be rust free and has a solid looking undercoating, as well as bed liner or similar around the bottom and rocker panels.  Icing on the cake is a full length awning and a newer 3 window tent canvas.  I’m guessing that this was upgraded and resorted in Europe and the imported to the US, however I’d ask the seller for the full details here. I have no idea how they’re going to get $88k for it, let alone even $50k.  However, it is a kick ass very hard to find Westy for the US market.  There’s a large Photobucket Album with more pictures than whats listed on eBay.  The auction ends on October 19th at 5:45pm PST. eBay Link 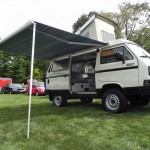 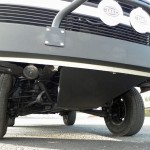 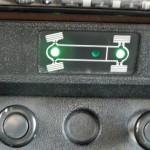