So I’m pretty sure I saw this Westy in person at Burning Van a couple of weeks ago, and while it’s donning a high sticker price, I think in today’s market for TDI syncro campers, it’s probably in the right ballpark, especially with the AHU TDI.  I didn’t notice the seam rust when I saw it in person, which surprises me as it’s fairly evident sore thumb looking in the photos, but hey at least the seller is honest. Find it for sale in Santa Cruz, California with an asking price of $38,000. The Samba Link

The TDI engine is the AHU from a 96-97 Passat and uses the full South African mounting kit, which “might” be how they refrained from modifying the engine lid, as most TDI swaps will sit higher than the original engine.  Mechanically it has recently seen new brakes, fuel line/tank reseal, decoupler , driveshaft, clutch, pressure plate, flywheel,  injection pump, rebuilt heads and a rebuilt transmission ~25K miles ago w/ taller 3rd and 4th gears. Front and rear skid plates keep your investment from eating rocks, Toyota Previa front seats keep that posture happier than stock Vanagon seats would and the South African grill and headlights for style and function. 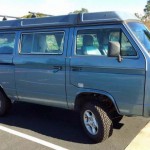 Clean lines, nice wheels and shoes too. But that rack mount? 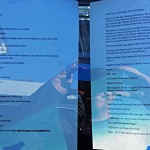 The picture of the specs I took at Burning Van

A few things I’m noticing.  Not sure who installed that roof rack, but um, don’t think you’re doing it right. No pictures of the pop top tent canvas, could be totally shot, or maybe not?  That hitch, what cha been towin? A bike rack, or a fishing boat? It doesn’t sound like there are any knobs or additional functions on the syncro side of things, so this could just be a stock AWD version without lockers or decouplers. There’s no VIN  or mileage provided, I should have taken a picture of it while I was at Burning Van. The seller is quite active on The Samba, so I’m sure they’re open to discussion and providing more details if you’re interested.

What do you think it’s worth? Let us know in the comments, or head on over to the discussion on Facebook, Twitter, Pinterest or Google + and let us know there!