I love it when sellers go the extra mile…  This specimen is a 1986 VW Vanagon Westfalia Camper with stock 2.1L engine, stock 4 speed manual transmission and 166k miles.  While the seller doesn’t state much in “words”, they do provide one of the best picture sets I’ve seen a in a while, especially for a sub $20k Westy. It’s being sold by a dealer, Music City Motorsports, however the van isn’t listed in their current inventory.  They’ve likely used up there free Auto Check reports on eBay, so there’s no title history available, however they did provide the VIN so you could do the homework on your own. (VIN WV2XB0256GH092794)  It’s reportedly only had two owners, and lived in southern states its entire life.  By the looks of it, I’d agree.  One of my favorite things about this listing is that the seller put the van up on a rack and actually shot photos of the undercarriage.  With the exception of a dash cover and what appear to be GoWesty 15″ wheels, this rig is mostly stock.  The upholstery appears to be peeling and tearing in place, though the original pop top canvas looks to be in great shape.  The only potential issue I see if the 2″ receiver hitch, as you never know what the previous owners tried to tow and the engine could be tired, especially if it’s the original and hasn’t been rebuilt.  They’ve got a Buy It Now Price Of $12,850, with the highest bid currently sitting at $4,700 and the auction ending on Tuesday, November 18th. eBay Link 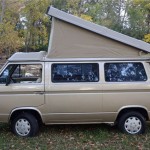 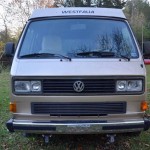 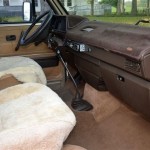 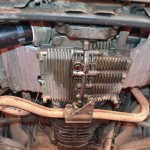 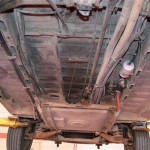 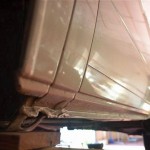 A Note For Potential Buyers: If this rig has a clean title and starts/drives/runs well, doesn’t get too hot and everything works, you’ve probably found yourself a deal. There are some that will balk at a $12k for an original ’86 weekender, but if you’re looking for a long term investment to take care of, this one looks pretty legit.

A Note For The Seller:You got almost all the way there, but the didn’t supply a title check report.  Great photos! Would love to see one of the dash without the cover on it.  Also, a YouTube video of it starting, running, driving, etc would go a long ways to entice West Coast buyers who would likely be more than willing to pay your Buy It Now price and have it shipped out for a grand(guesstimate).