While I don’t often post about rigs outside of the United States (I know little about importing vehicles), this one is definitely on every Syncro Westy hunters radar at the moment. This nice looking specimen is a 1986 VW Vanagon Syncro Westfalia Camper that was likely an original Canadian import (power hookup box is down low). While I don’t know much about importing vehicles to the US, it doesn’t sound like there is much involved other than maybe a $950 fee?  Someone with more knowledge of this subject matter should leave a comment below with their wisdom here.

It’s stated as a two owner vehicle with a clean title and no accidents, and the VIN is provided ( WV2ZB0255GG088119 ).  The free eBay Auto Check report shows what appears to be accurate mileage (in KMs of course), and there are no reported incidents.  However it’s always a good idea to get a 2nd report from a service like Car Fax to double check the records.

While there’s no notes on who did the engine swap, the seller state the Subaru EJ22 engine has roughly 62k miles on it and compression was recently tested. The tachometer doesn’t work, and for California buyers, this likely wasn’t done with all the necessary pieces to pass the CARB test, so be sure to inquire with the seller on this.  As far the the Syncro (AWD) side of things, it appears to have a rear locker(though the control knob is funky), and the viscous coupler works well. There’s mention of a new “driving shaft” which I’m guessing the drive shaft for the front wheels, and in the pictures of the undercarriage the drive shaft looks great. 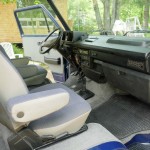 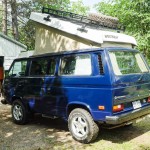 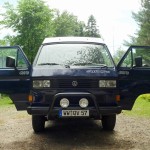 The kitchen appliances are all said to be working, and though the original fridge was recently serviced, it is finicky on propane, as they all are. Speaking of propane, there’s a new Bus Depot tank installed as well. As far as the exterior, the seller states it is not the original paint, and it looks to have been undercoated at some point.  With minimal visible rust, it is said to have been stored in winters, and as far as I can tell, the pictures show it’s been very well cared for. Some other awesome features include a front bull bar with Hella fog lights, Pioneer sound system, an odd yet awesome looking roof rack set up with full size spare tire, newer carpet and upholstery in various places, the original wheels and tires and some other odds and ends.

The eBay auction ends on Sunday, June 28th at 6pm PST, though it’s also listed on The Samba with an asking price of $32k. What do you think it’s worth?  Are you going to see it?  We want to hear your thoughts in the comments below, or head on over to the individual posts about this Syncro Westy on Facebook, Twitter, Pinterest or Google+ and share your words there.