Here’s a low mileage, rust free Florida find that just went up on the eBay auction block today.  This van is a 1985 VW Vanagon Westfalia Camper with stock 1.9L engine, stock automatic transmission and only 98k original miles. They state they’re parting with their Westy so they can open another restaurant. Seem to me like they should have some type of dish or menu item named after the one who was sacrificed for the cause.  The only issue I can seem to find with the pictures is the rust bubble under the rear window seal, but other than that this van looks fantastic. The seller provided the VIN ( WV2ZB0258FH084414 ) and the Free eBay Auto Check report which shows likely accurate mileage and the original owner had this van in Michigan from 1985 until 2010, when it was moved to Florida with the current owners.  The A/C works and has been recently recharged and there have been some other odds and ends added/upgraded recently as well.  While there is no reserve price stated, or other listings I could find online, I’m guessing the highest bid will be ~$12k, though I have a feeling they’re hoping for $15k+.  The auction ends Tuesday January 6th at 5pm PST.  eBay Link 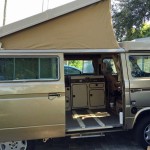 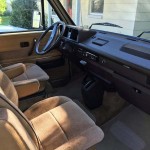 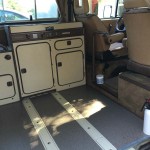 Happy New Years Eve everyone!  This is last post of 2014!  Look forward to a bigger, better and new WestfaliasForSale.com in 2015!