Wow I’ve been busy, sorry again for the lack of posting, and thanks a ton for all the love on Facebook, we are approaching 1,500 fans! While there have been some awesome Westys up for sale this summer, here’s a relatively rare find that is up for auction on eBay in Salem, NY. This van is a 1985 VW Vanagon Westfalia Camper with only 65k original miles, stock 1.9L engine, stock automatic transmission, and pretty much stock everything else as far as I can tell.

The current seller somehow obtained this from the original owner, who is 94, which means they bought it when they were 64, and one would likely assume it had been driven lightly.  The seller did provide the VIN WV2ZB0259FH007826 but since they’re a dealer they’ve used up their free Auto Check reports on eBay, so I’d suggest at least a CarFax report or similar to try and back up the history and mileage claim.  The seller openly provides their phone number and email in the listing, which is somewhat rare, I won’t post it here though. 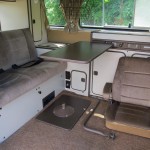 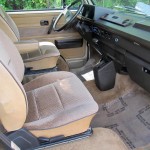 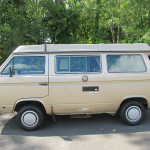 30 year old vans from the north east don’t usually fare so well, unless they’ve been stored in winter, like this one. By the way the seals, seams, paint, everything look, this is one of the best all original showroom like Westy’s I’ve seen for sale in a long time. Aside from a couple of hanging plastic bins, and carpet in the kitchen, it’s the all stock no mods real deal, even the og vw tape deck. Everything is either said, or implied to work, including all of the kitchen appliances. It also appears to have all the original curtains, tables, and even the single jump seat. The question is, what is this worth in New York state’s market?  Between San Diego and Seattle, this would fetch north of $17k if it’s all it said to be. I’ve never even driven the automatic transmission vanagons before, would love to one of these days. The auction ends on Tuesday September 22nd at 11:39am PST.

What do you think it’s worth? Are you going to see this Westy? Spill it all in the comments below, or head on over to the individual discussions about this Westy on Facebook, Instagram, Twitter, Pinterest or Google+ and share your wisdom there!