This Westy showed up for on The Samba last night, and I can’t seem to find it listed anywhere else on the interwebs.   This interesting specimen is a 1984 VW Vanagon Westfalia Camper with a Subaru EJ25 swap and a rebuilt manual transmission with a taller 4th gear.  There’s some seam rust, an no interior pictures, though due a variety of factors, this could be a good deal for someone in the Northeast US.

It appears this is the guy that did the transmission, Michael Benoit in Quebec, Canada, where the van currently resides.  While I know very little about importing vehicles from outside the US, I do know it’s much easier when they are over the 25 year rule hump, and also coming from the same continent, or neighbors in fact. The van doesn’t appear to be an original Canadian van, as the shore power hookup is in the same place as the US models. With the current exchange rate being what it is, 0.75 of $17,000 CAD is $12,750 USD.  As long as the undercarriage isn’t shot, and it runs and drives well without issues, that’s a steal for an EJ25 swap in the US. Though be sure to check with your states DMV to be sure it’s an easy registration (technically the EJ25 won’t work in California, but there are, ways…). 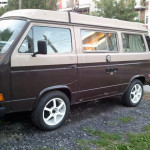 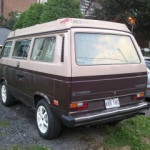 Minimal details are provided, though it does state it has new Michelin Defender tires on that 17″ wheels, which are kinda big, but probably ride really nice.  I run Defenders on my 16″ wheels and love them.  It’s got some bumps and bruises, some missing pop top seals, though it does come with a fresh pop top canvas.  There’s no notes on the kitchen appliances, propane tank, or other functionalities or maintenance performed, but again, the selling point here is CAD to USD, Subaru EJ25 and a rebuilt transmission, for under $15k.

What do you think it’s worth? Are you going to check it out?  Let us know in the comments below, or head on over the individual posts about this Westy on Facebook, Instagram, Twitter or Pinterest and share you wisdom there.  The Samba Link