We’re back! Sort of… In case you’re wondering where we’ve been, check this out.  Here’s a crazy build that sure to get some discussion over the next few days.  This van is a 1984 VW Vanagon Westfalia Camper with unknown mileage, serious powertrain upgrades, awesome interior upgrades and overall is said to have most of the common mechanical failure points addressed.  It’s definitely rough around the edges on the outside, but makes up for that in performance and comfort.

By far the most interesting thing about this specimen, is the stated engine in place, an EJ27 Subaru, which is supposedly the H6 design, but only 2.7L of displacement.  I can’t even find it on the Subaru EJ Wikipedia page. I think this is the first time I’ve ever seen this particular engine in a vanagon, and I’m pretty sure it was never offered in the US, so California buyers and others, beware of your states’ smog laws. 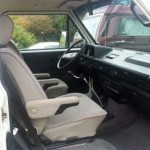 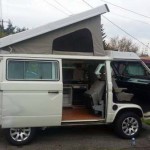 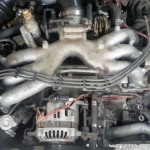 Powertrain.  As long as you can find someone who knows how to work on and EJ27, this engine sounds interesting. It sounds like it might not pass emissions in some states, especially with a “free flowing” exhaust.  Whoever did the work knows they need special transmission modifications to keep up with the toque of 6 cylinders.  German Transaxle knows what’s up.  I’d be sure to check up on the stated warranty though, as I know there are exceptions when the engine exceeds 150hp.

Some issues with this Westy.

There’s no VIN provided in either ad, the seller states the odometer stopped working recently.  So basically, go into this sale knowing the title could be full of issues, and the body may have over 300k miles on it.  Basically, assume the worst, and maybe it will turn out better than expected.  The exterior needs some love, and it could have some seam rust.  However, I do like the idea of having a nice Westy with a slightly shotty exterior, kind of a sleeper and less likely to be stolen or cased by thieves. White wasn’t an option for ’84, so this was obviously repainted at some point.  There’s no word if or how well the propane, fridge or stove work, though the details state there’s a new sink pump.

Find it for sale on craigslsit and The Samba in Lynwood, Washington with an asking price of $19,500. Craigslist Link – The Samba Link  What do you think it’s worth? Are you going to see it?  Let us know what you think in the comments below, or head on over to the individual posts about this Westy on Facebook, Instagram, Twitter, Pinterest or Google + and share your wisdom there!