We all live in a yellow submarine…. Here’s an eye catching beauty up for grabs on the East Coast with only a few days left to bid.  This van is a 1982 VW Vanagon 1.6L Turbo Diesel that used to be a Westfalia Camper pop top, though at some point it received an AdventureWagon high top in place of the pop top.  It’s up for auction in Cambridge, Massachusetts, with an auction end date of Wednesday, August 26th at 2:16pm PST.  eBay LINK  I honestly don’t even know where to start with this thing….

The 1.6L Turbo Diesel is an odd and rare engine, especially for North America. It currently has an oil leak from the head somewhere, though it is stated to be very slow an manageable.  The current owner states the van get’s about 21mpg city and 24mpg hwy, with a top speed of 65mph.  While this is a relatively desirable powerplant, it’s weak, and if driven to the floor for a while, it will probably blow up sooner than later. If you buy this, drive it gently, slowly, like it’s made of glass.  The seller references an upgraded transmission, however no other details are provided. It likely just got taller 3rd and 4th gears on a rebuild at some point.

It got a fresh coat of yellow paint and a fresh undercoating as well.  The build thread on the Samba shows the before and after, so it’s wasn’t in too bad of shape to begin with, though the body is approaching 300k miles. The seller did provide the VIN ( WV2YG0256CH037262 ) and the free eBay Auto Check report shows a very high score of 41. If you’re going to drop some serious coin, you may want to consider a Car Fax report as well. Next, amenities. 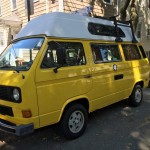 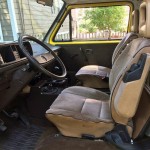 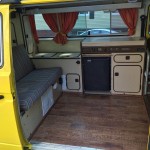 What do you think it’s worth? Any guesses on the winning bid?  I’m thinking at least $20k, if not much higher.  The main drawbacks to this van are the high miles and kind of weak engine, other than that it looks like a very nice build.  The seller says they’re looking for something 4wd.  If it were me, and money wasn’t an option, I’d drop in a 1.9L AAZ mTDI, a new transmission with Peloquins TBD, and 16in wheels. I just blurted out roughly $15k to $20k in upgrades, but hey, one can dream.   What do you think? What would you do to it? Let us know in the comments below the video, or head on over the individual conversations about this van on Facebook, Twitter, Pinterest or Google + and share you wisdom there!