Updated:  I actually had the opportunity to check out this van in person. The seller brought it over to my house a while back and I got to drive it around the block a couple of times.  If this van was in Seattle or SF, it would sell in a heartbeat. Hopefully someone up here buys it so it can remain local. Here’s the full scoop from my perspective.  Cosmetically it could use a little help around the edges, and it has no fridge installed. The powder light blue paint job looks good and underneath it’s very clean with minimal surface rust. While it could use a new tent, it’s not in horrible shape, and the upstairs is relatively clean, it could use some scrubbing though.  As far as driving it?  The engine feels and sounds great, and the transmission feels decent, I think the shifting linkage bushings could use some lube though, or something. I learned something today, since I’ve never driven an ’82. I guess the 80-82 shifting system was horrible according to GoWesty.(link) At any rate, I think this van could be worth $15k to the right person who knows what they’re getting into.  The seller also told me that Auto Haus 2 did a rebuilt transmission and this diesel set up for like $11k. From what I was told by someone else, this might be a rare mechanical TDI engine set up that wasn’t ever available in the US. Anyone else want to chime in here? There’s a picture of the engine compartment on the craigslist ad(link). 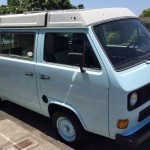 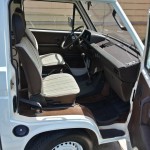 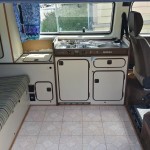 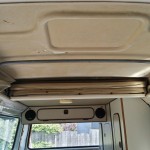 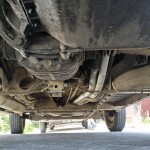 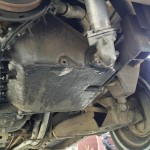 Original Post: Wow, this is the best find I’ve seen on my home turf since I bought my ’85 a couple of years ago.  This van is a 1982 VW Vanagon Westfalia camper with a 1.9L TDI engine, rebuilt transmission, 150k miles, fresh paint in 2007, newer battery, newer shocks, fuel tank re sealed, newer audio system and some other knick knacks too.  The 1.9L TDI engine looks like an AAZ or 1Z and is stated to only have 20,000 miles since being installed in 2005. This looks like the right price, especially if that engine is legit and strong.  Install a new pop top canvas, get a steering wheel horn cover, maybe throw on some fresh recarro seats and this thing will be pimpin.  I also just noticed it’s got a weird extra cabinet installed in the back, which is cool, but also prevents the rear table from being in place above the water tank unit.  I may see if they’ll let me test drive it so I provide a more detailed review.   Stay tuned… Find it in Arcata, CA for $15,00o.  Craigslist Link
SaveSavedRemoved 0

Never Buy A Vanagon Without The In Person Perspective